Mankind’s perception of galactic dominance comes to a terrifying end when an interstellar accident ignites a desperate conflict with an unstoppable enemy. 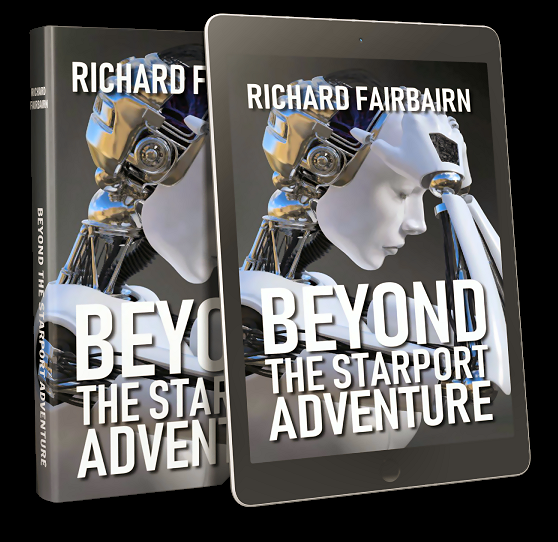 Beyond the Starport Adventure Paperback

Beyond the Starport Adventure Kindle

“When I found this book several months ago, it had been languishing on Amazon for 3 years. I would never have found it if Fairbairn hadn’t released it on Smashwords in January.

I regularly look at the recent releases on Smashwords. They make it easy and there aren’t so many new books that they sink into the abyss, like on Amazon.

I liked the cover so I tried it. I loved it.

The setting is a future where humanity has been exploring space for decades and have found nothing. Nothing, until a space liner jumps through a wormhole and comes across a religious, militaristic society that will seem familiar.

As the plot unfolds, the reader begins to realize that there are multiple time lines that pile up on one another (instead of the more usual alternate timelines) creating depth. These timeline hints give character insights that will leave the reader wanting more of this series.”

Beyond the Starport Adventure

After decades of unsuccessful space exploration, mankind resigns itself to a lonely existence in the cosmos. The age of exploration has come to an end. Aging cruise liners weave through ancient wormholes taking rapidly declining passengers to barren star systems empty of life.

Matt Archer and his father gazed up at the stars, planning the trip of a lifetime nicknamed “The Starport Adventure”. A product of childhood fantasy and paternal hope, the trip would take man and boy on an interstellar voyage to the outer reaches of explored space. Sadly, Matt’s father dies before the trip can be fulfilled. On reaching adulthood, Matt takes the cruise to the stars to honor his father’s memory.

A freak accident sends the cruiser hurtling through unexplored space. It smashes into an alien city, causing untold damage and claiming millions of innocent lives. Believing the incident to be an act of war, the powerful Enrilean Empire retaliates by attacking ships sent to investigate the catastrophe. Earth’s brave and hopelessly outmatched military forces battle insurmountable odds to rescue survivors whilst avoiding their own destruction as the disastrous first contact explodes into war.

The Enrilean Empire are hellbent on the complete annihilation of the human race, believing that humanity has a connection to their own ancient gods – mighty beings the first Enrilean civilization wiped out millennia ago in an atrocity now concealed within a twisted religion controlling all aspects of life in the empire.

Matt finds safety in a fantastically advanced alien spacecraft created by a mysterious alien companion who may hold the key to humanity’s survival in the new and hostile universe ruled by the Enrileans.

Beyond the Starport Adventure is the first novel in the Bullet series and the debut novel by Richard Fairbairn.

Beyond the Starport Adventure Paperback

Beyond the Starport Adventure Kindle

Beyond the Starport Adventure Lulu

Beyond the Starport Adventure Smashwords