“It’s all about Danny McBride for me…”

Yes, I’m a big fan. I was a little fan before this movie, now I’m a big fan. I feel that Danny McBride’s character gave us the “down to earth hands on action” that Idris Elbe brought to Prometheus. Other than that the movie was very much more of the same as far as I’m concerned. Not that that is necessarily a bad thing. If you like the Alien franchise well, there be aliens all over the place in this movie. In all different shapes and sizes. You might think, at some point, “That’s enough aliens now, we just wanted the Xenomorph.” No, there will be more strange and wonderful flavours of the original alien monster for you to enjoy (or cringe at). 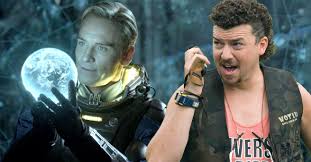 A good movie. I wouldn’t see it a second time, but maybe that’s just me. I found Michael Fassbender’s portrayal of David to be quite brilliant, but from an entertainment point of view, I found the movie unsatisfying. If the ending had been a showdown between Fassbender and McBride, I’d have liked that. Instead, I found the climax to the movie a little insipid. On the big screen it was a great spectacle and definitely worth seeing, but I think it could have been better.